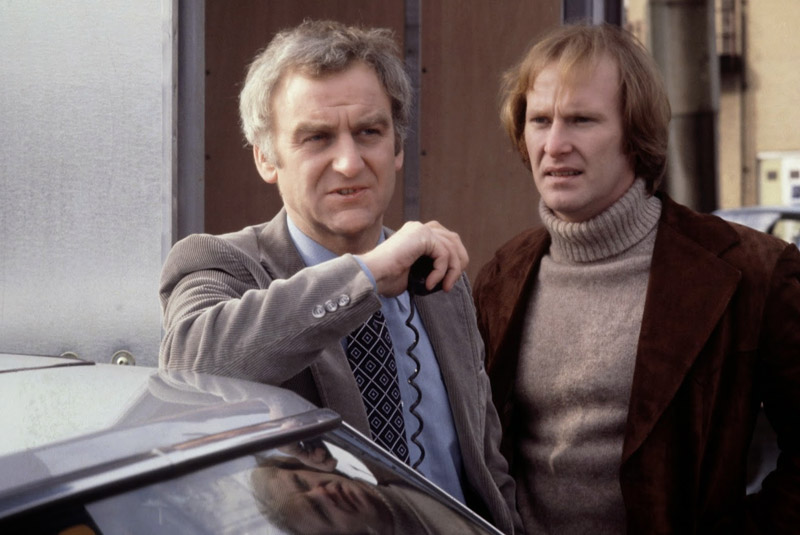 The very best cop shows become synonymous with their era. They portray society as it was and not always perhaps as it wished to be remembered.  They shine a light on crime and corruption and aren’t afraid to point out that these exist at all levels of society. What’s more they stand the test of time.  They look like they are from a different era because they are but their messages remain fresh and relevant.  Time, rather than dimming their lustre, serves only to enhance their appeal.  I thought a lot about that last week as I hurtled over the mid-life cliff and bounded into my fifth decade.  I took great comfort that two cop shows which were also born in 1975 show no signs of fading. They are as good today as they were 40 years ago.  Last time we looked at how Miami Vice brilliantly captured the city as it was in the 1980s.  Today, flushed with birthday cheer, I want to look at two examples from the 1970s.  Two of the best cop shows ever made.  Each ran for four series, ending in 1979 and each have had film versions or film reboots.  They portray life in London and California as it was in the 70s, and they pull no punches.  I give you The Sweeney and Starsky and Hutch.

You could be forgiven for thinking that there was little difference between the law and its transgressors in 1970s London.  This was thanks to the reputation of the Flying Squad, the branch of the Metropolitan Police charged with solving violent and serious crime.  Its officers fought fire with fire and when the 70s dawned full public disclosure of the corruption and violence employed by the Flying Squad led to a flurry of resignations.  Some of its officers were entrenched in the very gangs they were supposed to be fighting and the disclosure was uncomfortable to observe.  Eventually the branch was cleaned up and management practices cleared away the rot, but not before television had gorged itself on the carcass.  In 1975 the Flying Squad was as cockney a representation of the capital as it was possible to have and The Sweeney (Sweeney Todd was rhyming slang for Flying Squad) captured it perfectly.  Starring John Thaw as Detective Inspector Jack Regan and Dennis Waterman as Detective Sergeant George Carter the show was an instant hit.  Shot on 16mm film it looks great 40 years later but it makes for uncomfortable viewing.  Heavy drinking, drink driving, fights, weapons and failed marriages were all par for the course.  The first time Regan appears on screen he is late for work, stinking of whisky and looking considerably older than a man of his age should aspire to look. It goes downhill from his opening scene. Officers in The Sweeney lived hard and they broke every rule in the book. Victim, criminal, informant, witness.  All got the same treatment. Doors were kicked in, faces were punched and heads had stuff smashed over them.  Necks were either throttled or decorated with dirty kipper ties, or often both. Cars were driven fast, and the ashtrays were always full.  Corruption and transgression were everywhere.  It is quite magnificent and for four years it was the only cop show worth watching.  Save perhaps for one.

In the 1960s and 70s undercover NYPD cops Lou Telano and John Sepe donned different disguises ranging from women to Hasidic Jews in order to fight crime on the streets of the Big Apple.  They also drove around in a badass red sports car and had a weird and wonderful array of informants on which to lean.  It was too good a thing for television to miss out on and ABC transported the whole thing to the fictional Bay City, California.  They cast Paul Michael Glaser as David Starsky and David Soul as Kenneth ‘Hutch’ Hutchinson and they put them in bright red Ford Gran Torino with a huge white stripe down the side.  They dressed them in big chunky knitwear and leather jackets with furry collars.  They gave them a cool call sign, Zebra Three, and they had them drive around chasing bad guys, getting shot at and hanging out with gorgeous girls.  But there was still something missing.  Cue Antonio Fargas. Cue jive talking and cue Huggy Bear.  What followed was an explosive balance of smart writing (the pilot is extraordinary), good acting and Californian sunshine.  If you take a look from a distance of 40 years it is still easy on the eye but it is also still has the capacity to shock. The violence is often extreme, and bizarrely the whole thing is much camper than I remember.  There is also a genuine affection between the two main characters and the sense they really had each others backs.  Behind the scenes however it was far from a happy ride and the show eventually died a death when Paul Michael Glaser grew increasingly disillusioned with the whole thing.  But for four glorious years it was the epitome of 1970s Southern California and for a wide-eyed generation it was television crack.

As representations of the 1970s the two shows paint very different pictures.  The Sweeney is hard and grey. People are bloated, dulled by booze and morally conflicted.  In contrast life for Starsky and Hutch is sun-drenched and good looking.  But somehow the sun served to emphasise the dark corners in which Huggy Bear gave out information or into which crooks slunk to avoid capture.  The glamour of the location did nothing to hide the fact that bad guys were still bad and that the good guys had to fight dirty to catch them.  Two different shows, two different cities and two very different ways of life.  But essentially two very similar perspectives on 1975.

Both look pretty damn good to me.  Maybe life does begin at 40.