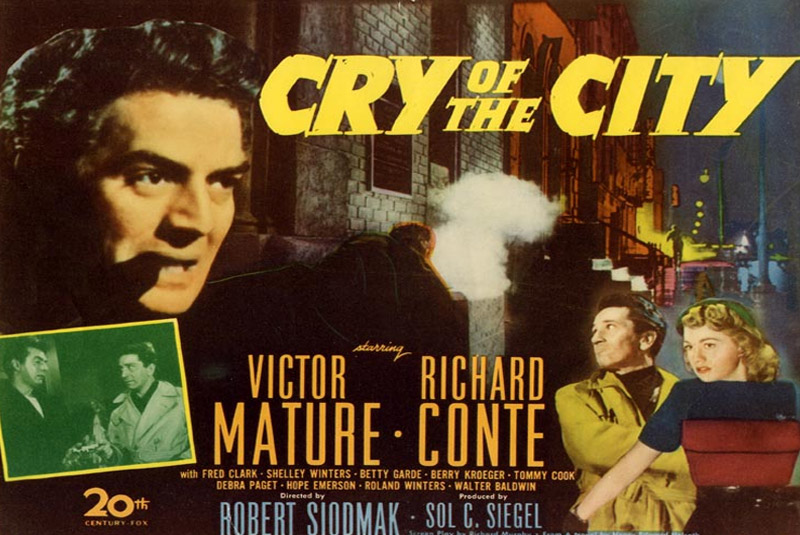 It you want to study a particular genre of film then typically there will be a selection of different works, by different directors that will give you a good sense of what the genre is about.  If you want to study film noir you just need to watch Robert Siodmak’s canon.  Siodmak is film noir and his towering contribution to filmmaking is currently being celebrated at the British Film Institute in London.  Robert Siodmak was born in 1900 and began his film career in Germany surrounded by the most incredible source of talent you could imagine.  In the 1920s and early 30s he worked with the likes of Fred Zinnemann and Billy Wilder, both of whom would go on to dominate Hollywood for decades. Wilder became the first person to win an Academy Award as producer, director and screenwriter of the same film (The Apartment, 1960) and Zinnemann would win best director awards for From Here to Eternity (1953) and A Man for All Seasons (1966).  Siodmak could not have had a better education.  He left Germany to escape the growing Nazi threat and arrived in America in 1939, escaping on the very day World War II broke out.  He initially worked on B-movies such as Son of Dracula (1943) and Cobra Woman (1944) and whilst these films would become cult classics he used them to develop his filmmaking style.  It soon became clear that this style gave itself perfectly to film noir.  A legend as the Prince of Shadows was born.

The Robert Siodmak: Prince of Shadows season is in full swing and this week I have indulged in two of his film noir classics, Christmas Holiday (1944) and Cry of the City (1948). They represent everything that is good about filmmaking. Fine acting, taut writing, innovative lighting, brave cinematography and that classic blend of European and American aesthetics that reeks of film noir.  Cry of the City is a part of Hollywood folklore. Based on Henry Edward Helseth’s 1947 novel The Chair for Martin Rome it tells the story of Martin Rome, played by Richard Conte, as he seeks to outwit and evade Lieutenant Candella, played by Victor Mature.  You know you are in for a good ride when you have got two leading male actors of that calibre facing off against each other and Shelley Winters waiting in the wings as a minor character.  But in the hands of another director this film could easily have descended into cliche or moved into a different genre.  With the Prince of Shadows at the helm however the tone is rock solid noir.

Set in New York and focusing on two Italian American characters, one a hardened criminal and the other a cop you could understand if the director had wanted to use the city as a backdrop and have lots of shots of the two men chasing each other. In fact you hardly see the city.  Siodmak realised that the setting doesn’t matter. Victor Mature was neither Italian nor from New York but that doesn’t matter either.  What matters is the sense of claustrophobia, of domesticity and of the crushing suffocation of what goes unsaid.  Siodmak was a master of what became known as chamber noir. He liked tight spaces in which he could trap his characters and by design the audience.  He gives you nobody to hold onto as a moral centre.  He gives you discomfort, shadows and sharp angles at every turn.  He makes the viewing experience difficult because you don’t know who to cheer for.  Siodmak juxtaposed extreme violence and the banal domesticity of home life in a way that characterises gangster fact and fiction.  You can see the same combination used in modern day incarnations, particularly in Tarantino’s work.

Richard Conte would go on to play several acclaimed Italian American characters and he is perhaps best known for his role as Don Barzini in The Godfather (1972) .  He came close to landing the part of Don Vito Corleone before Marlon Brando pipped him. In Cry of the City he is compelling.  You cannot take your eyes off him for a second. Siodmak never let’s you. He forces you to confront the monster that Martin Rome is by the way he frames the character in shot. He makes you doubt your own sensibilities and you find yourself rooting for Rome only for your faith to be misplaced when the character does something callous. As with all good noir stories, it is something of a relief when the inevitable ending comes. Siodmak knew how to extract magic from his actors. He coaxed a performance as a sociopath in Christmas Holiday out of Gene Kelly that beggers belief. He gave Burt Lancaster his big film break in The Killers (1946) where he played opposite Ava Gardner. He directed Olivia de Havilland in The Dark Mirror (1946) and Barbara Stanwyck in The File on Thelma Jordan (1950). Big names, bigger films, all of them noir and all of them classics.

My favourite scene in Cry of the City is when Lieutenant Candella interviews a room full of Eastern European doctors, one of whom helped Martin Rome recover from gunshot wounds. Candella is trying to find out which one.  He acknowledges their expertise but he takes care to point out that their credentials aren’t valid in the US. The characters are calm, distinguished and yet forced to get by behind the scenes and on the wrong side of the law.  For the law read the restrictions placed on filmmakers in the form of the Hays Production Code, and for the Eastern European doctors in Cry of the City read Robert Siodmak, a refugee, an immigrant, and a filmmaking legend. When people think of film noir they think of the Prince of Shadows.