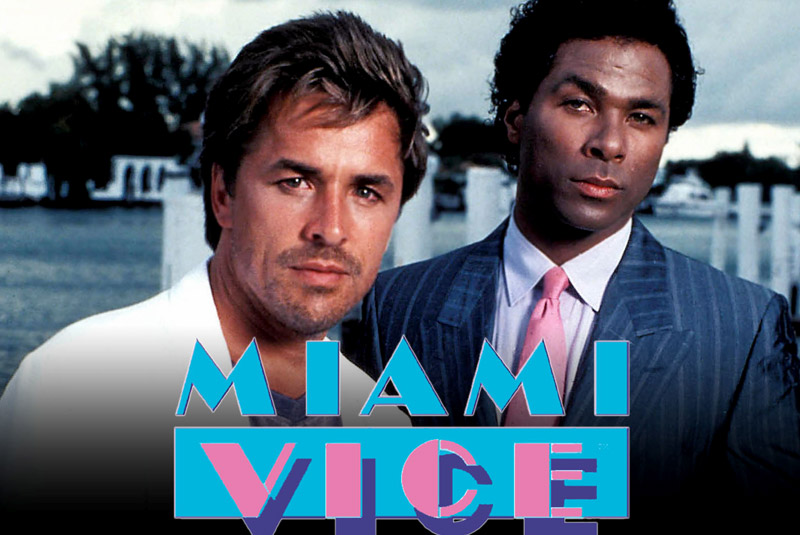 Given the response from our look at Hawaiian noir I’d like to turn the inkjockey® summer spotlight on to another seemingly idyllic playground.  It’s a location synonymous with palm trees and sunshine and in keeping with our theme of looking at the dark underbelly of exotic holiday locations it would be crime not to include Miami.

On the surface Miami is straight out of central casting. Sun, sea and sand stretch as far as the eye can see and the sheer glamour of the place is obvious.  Yet what lies beneath the surface is often of more interest.  Miami’s history is the history of the American city.  A seminal moment in that history came in 1979 when Arthur McDuffie was pursued on motorbikes by police after having made a rude gesture towards them.  Some of the chasing officers later claimed McDuffie crashed his motorbike and died, but one broke ranks and testified McDuffie had survived the crash only for the police to catch him, remove his helmet and beat him to death.  They then, it was alleged, called an ambulance and stuck to their accident story. Despite the testimony the officers were acquitted.  When the resulting riots ended three days later nearly 900 people had been arrested, 18 people had been killed and over $100 million of property damage had been caused. As a backdrop that’s a surreal confection. I’d offer the ongoing situation in Ferguson, Missouri as a modern day parallel.

Throughout the 1980’s Miami was one of the country’s largest receivers of South American drugs, a trade which brought billions of dollars into the city. The money was quickly cleaned but the evidence of its impact was clear. The city was dripping with money, fast cars, luxury developments, hotels and nightclubs.  It was also dripping with gangsters and violent crime. This was the Miami of Miami Vice. A city where law enforcement was futile. In the 1980’s 20% of all the unreported, i.e. under the table, income in the US came from Miami-Dade County. That means that less than 1% of the total population of the entire US generated 20% of its dirty money.  That had to be a story worth telling and it’s not a surprise that novelists, film, television and documentary makers have plundered the city’s history in the pursuit of story telling. It’s also the reason that the Miami Vice characters of James “Sonny” Crockett and Ricardo ” Rico” Tubbs, played by Don Johnson and Philip Michael Thomas respectively, worked for the Miami-Dade police department and not the city of Miami.  A small thing creatively, but a huge thing in terms of portraying the reality of 1980s Miami.   What looked glittery on the surface was loaded with meaning underneath.

When Miami Vice exploded on to television screens in 1984 it had an instant impact.  It broke with every possible tradition, and set new boundaries for police procedural television drama.  It was the first television show to use stereophonic sound and the soundtrack was instantly a part of the show’s appeal. The cinematic quality of shows like True Detective and American Horror Story are following a trail that was first blazed by Miami Vice. If you’ve seen the sequence where Sonny Crockett cruises the wide boulevards of the city in a black Ferrari Daytona you’ll be able to hear the iconic overlay of In The Air Tonight by Phil Collins. This was stuff straight out of the cinema and television had never seen anything like it. For five series and over 100 shows Miami Vice set the bar impossibly high. Each episode cost over $1 million to make and it changed the face of television completely. It’s main actors  became A-list stars and Don Johnson was arguably the face of the Reagan era. His portrayal of Sonny Crockett, an undercover detective who lived on a houseboat with a pet crocodile named Elvis is what I think of when I remember the 1980s. Designer stubble, suits with t-shirts, suits with the sleeves rolled back, fast cars and loud music. The show launched the careers of dozens of jobbing actors like Stanley Tucci, Liam Neeson, Bruce Willis, Laurence Fishbourne and Michael Madsen and it brilliantly captured the American dream as it was at that time. It was the last hurrah for an era dominated by fashion and ostentatious wealth. The show was given a big screen outing in 2006 when executive producer Michael Mann cast Colin Farrell and Jamie Foxx as Crockett and Tubbs. The film version was grittier but it stuck rigidly to the show’s roots.

Cocaine Cowboy, Miami Blues and Scarface are all excellent representations of the city at that time in documentary, novel and film format but for me Miami is Miami Vice.  If you’re interested one of the cars used in the show is about to go on sale.  A white 1986 Ferrari Testarossa.  It’s been in storage since 1989.  Estimates haven’t been set yet, but I’d be surprised if it doesn’t reach at least $2 million.

Oh yes, the title of this post…well for decades it was rumoured that this was the logline the producers used when pitching the idea of the show to executives.  Sadly it isn’t true. I hate that.  Do yourself a favour and find the opening credits on YouTube.  You’ll get Jan Hammer’s outstanding theme tune, flamingos, sun, surf, bikinis, Sonny Crockett, Rico Tubbs, a white Ferrari Testarossa and a big dose of 1980’s Miami.

I reckon it’s ripe for a reboot. How fabulous would that be?