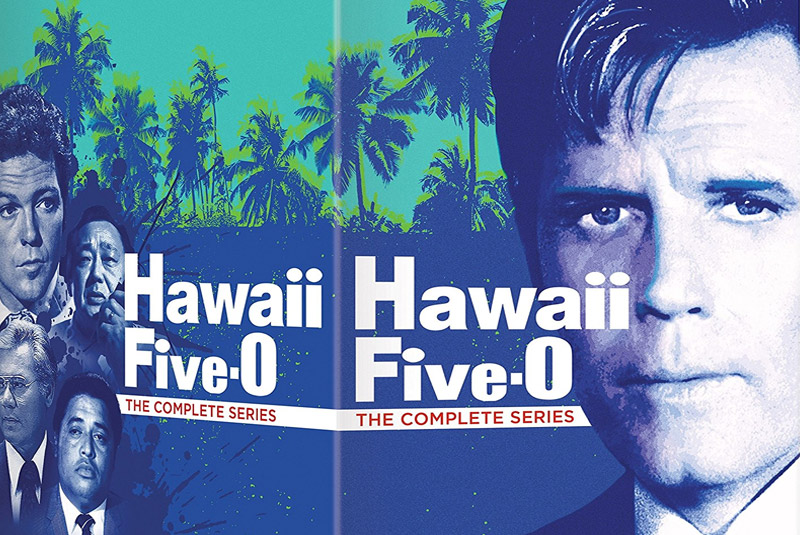 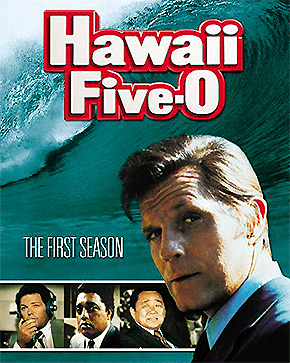 This week’s news that CBS is holding an open casting call for Hawaii Five-O put me in the mood for Aloha shirts, cocktails and Morton Stevens’ legendary theme tune. Conscious that the inkjockey posts of late have all followed a rather serious theme and in preparation for the impending August hiatus I wanted to start the summer season with a celebration of all things Hawaiian.  Well maybe not all things, but certainly those related to crime fiction, for despite being a small collection of volcanic islands in the Pacific Ocean the archepelago is home to some genuinely iconic crime fiction names.  So let’s kick back, grab a drink with a cocktail umbrella and start to wind down.

The original series of Hawaii Five-0 (the reboot replaced the zero with the letter O) ran for twelve series beginning in 1968 and has been in almost constant syndication since it ended in 1980.  Detective Captain Steve McGarrett (Jack Lord) and Danny Williams (Jack MacArthur) battled secret agents, organised crime gangs and local crooks. For a little slice of paradise Hawaii certainly had its fair share of problems.  Like all good police procedurals the formula was rock solid and each episode typically ended with McGarrett arresting the bad guys and ordering a colleague to book ’em.  This instruction was regularly barked at Danny Williams and the legendary catchphrase Book ’em, Danno was born.  The show was given a reboot by CBS in 2010 and the casting call being held this weekend is for the sixth series.  Incredibly over 100 episodes of the reboot have already been aired.  An amazing achievement and one worthy of recognition. 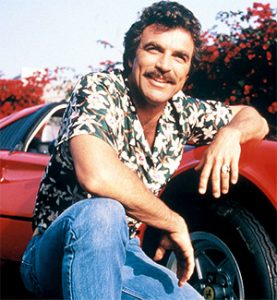 Reflecting on the casting call it made me wonder if CBS would ever consider a reboot of the show that took over the Honolulu reins from Hawaii Five-0 in 1980.  Featuring Tom Selleck, John Hillerman and occasionally Orson Welles as the voice of the reclusive Robin Masters, Magnum, P.I. ran for eight series.  The Rolex touting, Aloha shirt wearing, bad-ass red Ferrari driving Thomas Sullivan Magnum IV is part of television and crime fiction legend.  With the two shows in almost constant syndication and over 400 episodes between them, not counting the reboot, it is safe to say that from a television perspective Hawaii and crime fiction are a popular sell.  But what then, of other formats.

Despite the undoubted colour of the scenery, not to mention those shirts, perhaps the most interesting contribution Hawaii has made to the genre is in the form of black and white film noir. Whilst much less well known than the TV shows that would follow it  Hell’s Half Acre a 1954 film directed by John H. Auden who would later work on Thunderbirds and The Avengers is a sort of monochrome version of a flawed paradise.  Islanders wearing lais, tiki bars and Hawaiian music quickly give way to murder long before the opening credits have finished.  What follows has all the tropes of good film noir and the film canters along ticking off melodrama, contrivance, claustrophbia, revenge, man-on-the-run and occasional violence that has the capacity to shock.  For extra points the whole thing is filmed in the real Hell’s Half Acre which is now home to Hawaii’s Chinatown. At it’s peak of infamy during World War II it was stuffed full of brothels and madams all of whom were primarily concerned with keeping up the morale of US soldiers. The Honolulu Police Department’s Vice Squad imposed a heavy regulatory hand and beatings, unofficial taxes and expulsion were normal.  The most famous of the madams, this is all true by the way, was Jean O’Hara who sailed to Hawaii from San Francisco in the late 1930s. She took on the Vice Squad and broke the most sacred of all the rules they had imposed.  She ran brothels outside of Chinatown.  When martial law ended in 1944 she published a book, My Life as a Honolulu Prostitute. That was the beginning of the end and the brothels were shut down soon after. The whole thing provides a fascinating context for Hell’s Half Acre.

The history, and the dark underbelly of Hawaii may surprise you, as may the existence of a thriving sub-genre in the form of Hawaiian noir.  Buried deep in the crime fiction atlas this tiny strand is a real treat and US born writer Mark Troy is leading the charge. Whether it be through Val Lyon or Ava Rome, both female private investigators, Troy taps away at the dark underbelly of Hawaii’s tourist facade.  His 2014 Ava Rome outing The Splintered Paddle is an excellent example.  Featuring bent cops, stalkers, hookers and drug pushers The Splintered Paddle is hardboiled Hawaiian-style crime fiction.  Similarly, Game Face a 2011 collection of short stories featuring P.I. Val Lyon, is littered with some genuinely delightful wisecracks and uncompromising attitude, not least from Lyon.

If comic books are more your thing then you could do worse than look at B. Clay Moore’s Hawaiian Dick compendiums, illustrated by Steven Griffin.  Featuring an exiled US detective B. Clay Moore has set his stories around the same time as Hell’s Half Acre and they confront the voodoo undertone of the islands head on.  Moore is comic book royalty and has written for pretty much everyone, from Marvel to DC Comics. There is something about the format that really brings out the supernatural and the obvious crossover into noir.

Island paradise it may be, but when you stop and think we shouldn’t be surprised that a wide range of formats has mined the region for crime fiction stories.  Prostitution, corruption, gangsters, criminals and voodoo-hoodoo, all crossed with a volcanic backdrop to die for.  If you want a holiday cocktail why don’t you start with this taster from Game Face by Mark Troy,

Glenn Floeck moved down concourse C of Honolulu International Airport as though he expected everybody to get out of his way. Most people did. Not so much because he was Glenn Floeck, whom few people recognized, but because he strode in the wake of a black man the size of a Lincoln Towncar.  The black man hefted a golf bag carrier over his shoulder as though it were a middle schooler’s book bag.